GoPro has been the industry standard for action cameras for over 15 years. It wasn’t until a few years ago that brands such as DJI and Insta360 began making action cameras with more features that challenged GoPro’s lead. This year, though, GoPro has created by far its most powerful action camera to date.

The GoPro Hero 9 is more robust in almost every way: bigger battery, bigger body, bigger video and photo resolutions. Plus, for the first time, it comes in a reusable case with no plastic packaging, which is big for the Earth, dirt, and air this GoPro inspired me to explore.

Yes, this camera inspired me and never stopped me, so much so that I wished I had more exciting things to do in front of it. Building upon years of action camera knowledge, GoPro has finally mastered a hardware experience that never frustrated me, while sticking to software that, although takes a bit of getting used to, holds endless resolution and frame rate capabilities. 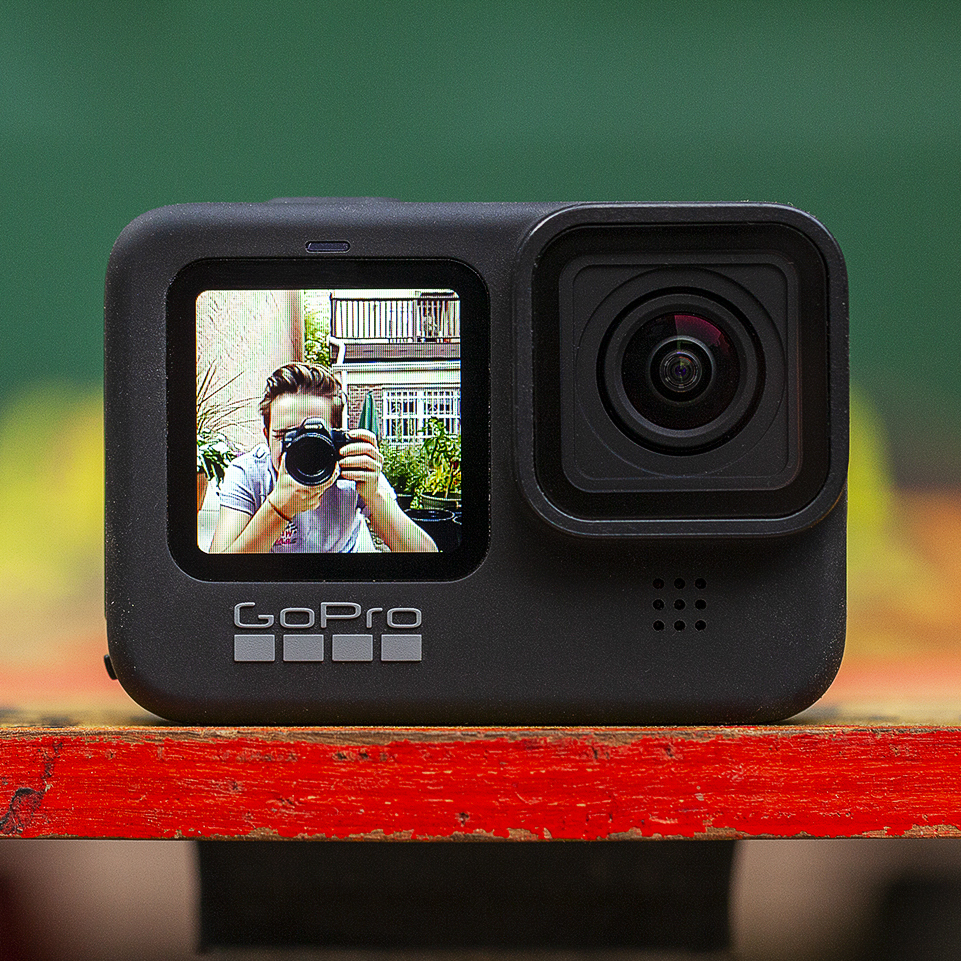 First bigger thing: its actual size. The Hero 9 is noticeably larger than last year’s Hero 8. A bit thicker, a bit wider, and a bit taller. This never got in the way of where I wanted to mount it or how it felt to carry around, though, and it still has the same sized dual prongs for mounting that are magnetically stowed on the bottom of the camera. That means that you don’t need a separate case or housing to attach accessories, like you did with the Hero 7 and older models.

With the larger size comes a larger back touchscreen, 2.27 inches diagonally. It has the same USB-C port, microSD card slot, and battery compartment on one side, along with the start / stop button on the top and the power and mode button on the side. There is also this weird latch-looking piece on one side that I thought was removable, but it is not. GoPro calls this the “Drain Mic” and explained that it is designed to drain itself after the camera is submerged, which should make for clearer audio when you’re coming up out of water.

Tech is a tool and therefore I treat it as such. In the two weeks I’ve been testing the Hero 9, I’ve been going as hard on it as any of my own gear and it’s held up with no scratches or dings.

If the lens were to get scratched, though, GoPro brought back a feature from the Hero 7 that I truly missed on the Hero 8: a removable front lens cover. On the Hero 9, you can remove the cover that sits over the lens with a hard twist and pull. This creates a much better way of mounting ND filters and lens accessories, such as the Max Lens mod GoPro is releasing in October of this year. Unfortunately, there is no backwards compatibility, so your Hero 7’s ND filters won’t fit on the Hero 9.

The last big hardware change, and my favorite addition this year, is the front-facing screen. I would say 80 percent of the time I’m using a GoPro, I am facing the front of the camera when framing the shot. I am always way too impatient to pull up GoPro’s app on my phone to see my framing, so an instant view on the front of the camera is very useful. You can change the screen ratio of the front screen, what information it displays, or toggle it on and off in the Hero 9’s menu. There is a bit of a lag on that front screen when recording or using Hindsight mode, which saves the previous 15 or 30 seconds of footage that the camera recorded before you hit the record button, but otherwise the colors are vivid and the information is clear.

More screens mean more power usage, so GoPro bumped up the battery from 1,220mAh in the Hero 8 to a 1,720mAh in the Hero 9. The Hero 8 was known for heating up during normal use, but despite a bigger battery, I did not experience the Hero 9 getting hot to the touch. For heavy use, two batteries will still be needed to get through a full day. However, during my very chill vacation days of testing, where I was turning the camera off while not using it and only watching playback at the end of the night, I was able to get through a full day on one battery, which is right on par with the Hero 8.

Next bigger thing: resolutions. There is just about every resolution and frame rate combo you could possibly need on the Hero 9. The 20-megapixel sensor can record 5K 30fps, 4K 60fps, and all the way up to 1080p 240fps. I spent most of my time filming in 5K with the default “GoPro” color setting on.

The 5K footage is remarkably crisp. I dig the default color option that punches up the saturation and keeps a high level of contrast. Pair the vibrant colors with the amazing in-camera stabilization and, bingo-bango, you have really nice-looking footage straight out the cam. Also, when editing our review video in 4K, I really enjoyed having the bit of extra space for reframing.

In terms of stabilization, there is also a more robust HyperSmooth 3.0 this year. I’m constantly amazed with this in-camera stabilization, and new this year is an in-camera horizontal leveling option when shooting in the linear frame, which is a bit cropped in from the wide frame. This makes it really easy to keep the horizon level on the screen.

There is also a new duration capture, a schedule capture mode for time lapses, and the new Hindsight mode. The battery runs down a bit faster with Hindsight mode enabled because the camera is consistently recording.

The photos from the 20-megapixel sensor are good. HDR photos do take a long time to process, and I was not overly impressed with how the shadows are brought up to extreme levels in HDR mode. But with HDR turned off, the photos are punchy, bright, and crisp. At night, the camera operates a bit slowly, though, leaving blur and grain in the photos. A great next step for GoPro would be an astrophotography feature. Am I asking too much?

And last but not least, there are a few new mods coming out for this camera. Last spring, GoPro released the Media Mod for the Hero 8, with a built-in directional mic, HDMI outputs, and a cold-shoe mount. This October, they are releasing a Max Lens mod for $99, which is the company’s first lens mod.

The Max Lens mod brings an even wider frame to the Hero 9 and allows for horizontal leveling no matter the orientation of the camera because of the spherical image it captures onto the sensor. You can only shoot up to 2.7K with it, though. I didn’t find it to be that much wider than the widest setting on the Hero 9, but I did enjoy putting it on and not telling the Hero 9 to switch to Max Lens mod mode so that I could capture video with a weird sick circle frame around it. Check out the video above for samples of what that looks like.

So, the Hero 9. GoPro brought back the removable lens, is rolling out mods, put in a bigger battery, a larger sensor, 5K video, and most importantly, it finally has a useful front screen. But for all of these big improvements, there is that larger price tag.

Considering the upgrades, though, $449 is still a reasonable price for what you’re getting. Sure, you can grab the Hero 8 Black for around $350 now or DJI’s Osmo Action for $250, but neither of those cameras can shoot at 5K. And then there is Insta360’s One R with a 1-inch sensor mod for $500, but I much prefer the color the GoPro puts out more, and well, the Hero 9 is $50 less.

Add all that up and the Hero 9 is the biggest, baddest action camera out there — a camera that makes me want to keep up with it.

Photography by Becca Farsace / The Verge

Wed Sep 16 , 2020
Sony is hosting another virtual showcase for its upcoming PlayStation 5 console. It’s airing later today, and we expect to hear the last precious drips of info: a release date and prices for both configurations of the PS5 (the discless version and the model that has the Blu-ray drive). It […]